This entry was posted on October 20, 2020 by Becca Armstrong-Benson. 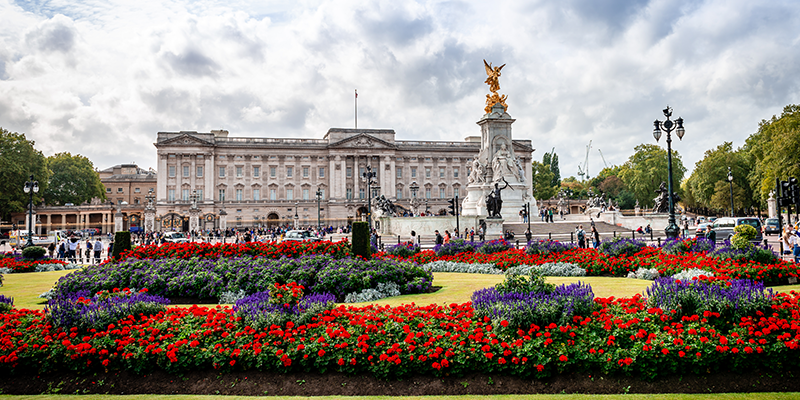 It’s no secret that the royal family love flowers, but their personal favourite blooms have remained something of a mystery - until now.

Several royals, including the Queen, Prince Charles and Princess Anne, revealed their most-loved flowers in May, when the RHS Chelsea Flower Show was forced to go virtual for the first time (thanks for nothing, Covid-19). Others, such as the Duchess of Cambridge and the Duchess of Sussex, have kept quieter about their tastes, but our floral detective skills means we can place a strong bet on where their botanical affections may lie…

Behold, the knights and dames of the flower world!

Earning the title of Her Maj’s favourite flower is quite the accolade, so take a bow, lily of the valley! Elegant yet hardy, The Queen shared on Twitter that she loves these sweetly-scented white flowers best of all. They are grown in the grand gardens of Buckingham Palace and featured in her 1953 coronation bouquet, which also included orchids from Wales, carnations from Northern Ireland and stephanotis from Scotland.

In the language of flowers popularised by Queen Victoria, lily of the valley symbolises trustworthiness, which seems appropriate for the world’s longest serving monarch.

The Prince of Wales is often vocal about environmental issues and finds gardening “marvellous and therapeutic”. The heir to the throne has a soft spot for “the magnificent, gloriously aparelled delphinium” which he grows and cares for in the grounds of Highgrove House, his private Gloucestershire residence.

Speaking to BBC Radio 4 last summer, Prince Charles said: “I have an absolute passion for delphiniums and I’ve always had it. There’s something about those Edwardian watercolours.”

The name ‘delphinium’ comes from the Greeh word ‘delphis’, meaning dolphin, in reference to the flower’s buds resembling a dolphin’s nose. There are over 300 varieties of the popular early summer perennial, which symbolises positivity.

The Duchess of Cornwall’s surprising pick of the bunch is the humble foliage plant alchemilla mollis, which she describes as “a must for every gardener” with its fluffy, acid green flowers that make great fillers for beds or vases.

Be warned, however, that the species also known as ‘lady’s mantle’ reseeds prolifically, quickly taking over small gardens. It can be tough to dig up once established, too.

The Princess Royal has a penchant for hellebores, also known as Christmas roses. Taking part in the #MyChelseaGarden campaign, she said: “Not only do [hellebores] flower early, but they keep flowering for two months, and they are often beautifully marked with endless variations.”

The Earl and Countess of Wessex

Edward and Sophie, the Earl and Countess of Wessex, shared a photo of some hot pink and fiery orange azaleas for the same campaign, praising the “breathtaking” species for their “intoxicating scent”.

On the 23rd anniversary of Princess Diana’s death in August, Prince Harry planted his mother’s favourite flower, forget-me-nots at a preschool in California. He also named Sentebale, the charity for children orphaned by AIDS that he set up with Prince Seeiso of Lesotho, after the miniature blooms. The name translates to ‘forget me not’ in the country’s national language of Sesotho, with both princes dedicating it to their late mothers.

The former Princess of Wales also loved white roses, which filled her 2017 memorial White Garden at Kensington Palace, along with lilies, tulips, nemesia, cosmos and, of course, forget-me-nots.

The Duchess of Cambridge, formerly known as Kate Middleton, nodded to her grandmother-in-law by including lily of the valley as the dominant flower in her 2011 wedding bouquet. Hyacinths, ivy and Sweet William (aww!) played supporting roles. Her chic bunch also featured a sprig of myrtle from Queen Victoria’s garden at Osborne House on the Isle of Wight, as is traditional for royal brides. Myrtle means ‘good luck and love in marriage’ in the language of flowers, popularised by the former monarch during her 19th century reign.

Kate’s 2019 Chelsea Flower Show garden, Back to Nature, showcased her love of woodland and flowers, with forget-me-nots, blue periwinkle, geraniums and astrantias sharing the fairytale space with rhubarb and strawberry plants.

Before marrying Prince Harry in 2018, Meghan Markle was an actress and lifestyle blogger with thousands of Instagram followers. She often posted photos of blousy pink peonies, which she said made her “swoon” and “so endlessly happy”. They smell divine and bloom brilliantly, if briefly, every British summer.

Meghan’s all-white wedding bouquet featured lily of the valley, jasmine, astilbe, astrantia, sweet peas and forget-me-nots, which Prince Harry picked from the couple’s private garden as a tribute to Princess Diana. The entrance to St George’s Chapel in Windsor with white roses, foxgloves and peonies. Seasonal beech, hornbeam and birch added greenery, along with foliage taken from Windsor Great Park and The Crown Estate. It was certainly fit for a princess!

Lately, the era of Zoom calls has given us the odd glimpse inside Harry and Meghan’s new $14 million Santa Barbara mansion. Fresh green hydrangeas piled into a statement vase could be seen in the background of one recent appearance, while the Duchess has previously been papped buying pink tulips, red roses and sprigs of eucalyptus.

Princess Eugenie chose lily of the valley, thistles, white spray roses and trailing iris for her autumnal 2018 wedding to wine merchant Jack Brooksbank. They live in the charming Ivy Cottage in the grounds of Kensington Palace, which may explain the inclusion of ivy, too.

Inspired to dress your home like a queen? Shop our range of beautiful blooms, all covered by our happiness guarantee for royal approval.

The Best British Flowers by Season