This entry was posted on April 14, 2021 by Becca Armstrong-Benson. 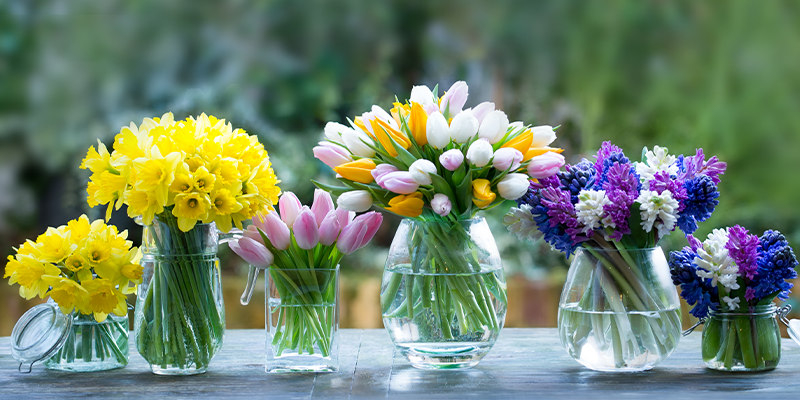 Spring is here, and the world is back in bloom! Some of our favourite blooms are in season in spring, including tulips, hyacinths, and daffodils.

Here’s everything you need to know about these beautiful spring flowers.

A springtime classic, tulips are full of colour and it’s no surprise they’re one of the most popular spring flowers. They’re available in a wide range of tones, including pink, purple, yellow, red, white, and pink. We send them in bud, but they’ll open up after a few days in water to reveal their lovely cup shaped blooms.

In the language of flowers, tulips signify deep love, with other colours having varying meanings. Pink blooms symbolise happiness, whilst yellow tulips send a message of cheer. White tulips are associated with forgiveness, and purple tulips signify royalty.

Tulips are native to Central Asia, and as a result they play a central role in myths and legends from the region. Most notably, they’re significant in the Turkish and Persian story of Farhad and Sharin. Nowadays, however, tulips are most often associated with the Netherlands. From March to April, parks in the city are filled with the colourful blooms, and there are stunning tulip fields not far from the city. In the Dutch Golden Age, ‘tulip mania’ spread through the nation, with the prices of tulip bulbs hitting unprecedented levels, before unceremoniously crashing not long afterwards.

Another spring favourite, hyacinths have striking spires of densely packed florets, and an unforgettable, heady fragrance. They’re the perfect way to fill your home with the scent of spring and are a beautiful statement stem for bouquets. Hyacinth colours include periwinkle blue, fuschia, pastel pink, and white.

Unlike most cut flowers, you shouldn’t trim the stem on arrival. This is because the thick, stubby base is in fact part of the bulb, and helps them to stay well hydrated. Hyacinths also arrive in bud form, which means they become more colourful after a couple of days in water, and may appear quite pale at first.

In Victorian times, hyacinths were said to symbolise sport and play, with blue hyacinths representing sincerity.

Hyacinths are native to Turkey and the Middle East, and were mentioned in Greek and Roman poetry. The name ‘hyacinth’ comes from the Greek name ‘Hyakinthos’. Hyakinthos was a sportsman who was killed by Zephyr, the god of the west wind, who was jealous of his discus prowess. The hyacinth was said to grow from the slain man's blood.

A common sight in Britain in the spring, daffodils are one of the most recognisable spring blooms. These joyful flowers are found wider than that though, with their natural range covering many countries in Europe and North Africa.

Their Latin name ‘Narcissus’ shows their link to Greek mythology. Narcissus was a vain and arrogant man, who was lured to a river by Nemesis, the god of vengeance. He became completely enraptured with his own reflection, and was unable to move away. Depending on the version, he was either turned into a daffodil, or he fell into the river and drowned, with the flowers growing nearby then named after him.

Despite this rather grim tale, daffodils are a symbol of hope and renewal. Their cheerful yellow blooms emerge at the end of winter, and they represent new beginnings, rebirth, and spring itself.

Daffodils are also the national flower of Wales, and are traditionally displayed and worn on St David’s Day.

Also part of the Narcissus family, paperwhites have delicate, creamy white flowers and a powerful, sweet fragrance. They're smaller than daffodils, with clusters of pretty blooms on each stem.

Not everyone likes the scent - in fact, it’s often the case that people love it or hate it! This is due to the organic chemical ‘indole’ which is also found in other flowers like jasmine.

Like daffodils, they’re associated with rebirth, renewal, and the beginning of spring. They’re one of the earliest spring blooms to emerge, and can even bloom at the end of winter.

Want to celebrate the new season in style? Shop our spring flowers to find your perfect seasonal bouquet.