8 Facts You Didn't Know About Sunflowers

This entry was posted on July 28, 2020 by Becca Armstrong-Benson. 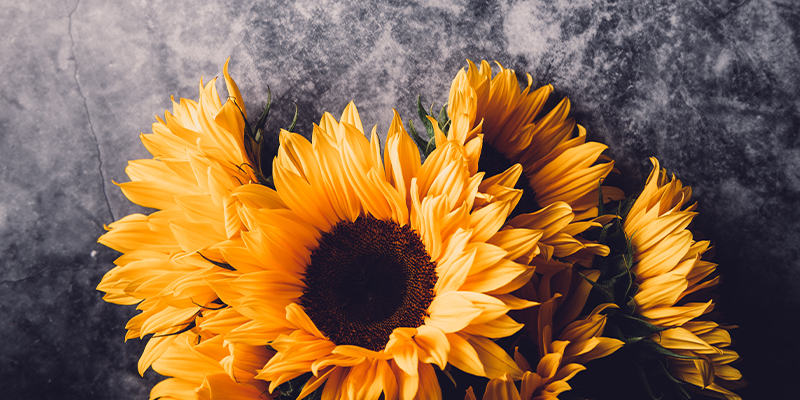 Nothing says summer quite like sunflowers, and they’re great for bringing a real touch of the season to any bouquet.

Bright and cheerful, these iconic blooms look just like miniature suns. There’s no better flower for spreading summer joy and we love including them in our arrangements.

Love sunflowers? Here are just a few facts about them that make them all the more incredible.

Sunflowers are originally from North America and have been cultivated for over 4,500 years. This is partly because the entirety of the sunflower plant is edible, so the leaves, stalks, and roots could all be used as food. In fact, sunflowers were grown as food in North America before other crops such as corn became commonplace.

In addition, sunflowers were milled to create flour, and their seeds were roasted and eaten. As is still the case today, sunflower oil was used in cooking. The oil and pigments could also be used for various cosmetic applications such as dyes, and the stalk could be used in construction.

Sunflowers became popular as a decorative flower when Spanish explorers brought the seeds back to Europe in the 1500s.

The meaning of sunflowers

With all their associations with sunshine, it’s no surprise that sunflowers are considered a very positive flowers. Send them to convey emotions like happiness, warmth, luck, adoration, and friendship. They’re the perfect flowers to celebrate a joyous occasion, or to cheer someone up who’s going through a tough time.

Not only do sunflowers resemble miniature suns, their blooms also follow the sun across the sky. They have their own biological clocks which help them to follow the sun as it moves from east to west during the day, and then move back to their original position at night.

However, they only do this as young plants, as it helps them to grow properly. Once fully grown, they stay facing east as this attracts bees and other pollinators.

In Greek mythology, the sunflower is often associated with the myth of Clytie and Helios. Clytie was a water nymph, and deeply in love with the sun god Helios. Sadly, he left her for another goddess, and it’s said that Clytie watched Helios crossing the sky in his golden chariot for days, without any food or water. Eventually, she was transformed into a sunflower, and it’s said this is why sunflowers always face the sun.

Sunflowers also held significance for the ancient Inca people. They considered them a symbol for the sun, and used them as part of their worship in temples.

Sunflowers can get really tall

On average, standard sunflowers reach a height of between 6 to 10 feet, but they can get much much bigger. The tallest sunflower ever recorded was 30 feet, and needed some rather elaborate scaffolding to keep it stable. It was grown by Hans-Peter Schiffer in Germany, who had already broken the record three times before.

There are many types of sunflower

The most common and well-known sunflower is the Helianthus Annus. However, there are actually 70 different species in the Helianthus family, all of which are native to North and Central America. Alongside the traditional yellow sunflower, there are also red and white varieties. Sunflowers don’t always have the typical shape either - some have ruffled, fluffy blooms, like the Orange Sun sunflower.

Sunflowers can clean the world

Sunflowers have a remarkable ability to absorb toxins, including toxic metals and radiation. Following nuclear disasters such as Chernobyl and Fukushima, scientists planted millions of sunflowers to help the land recover Similarly, they’ve also been planted in areas with high concentrations of lead.

In scientific terms, they’re ‘hyperaccumulators’ which means they can absorb much more of these contaminants than other plants. It’s believed plants develop this ability partly to make them less tempting as a snack for herbivores.

Sunflowers are made up of many tiny flowers

You might think each sunflower is just a single bloom, but each flowerhead is actually made up of up to two thousand florets. These tiny flowers are packed full of nectar, making them a great treat for bees as well.

Want to bring some sunshine into your day? Shop our beautiful selection of sunflower bouquets.